Mrs Wong Kwok Leong is a simple woman with a big heart. She spends a lot of time meditating and she doesn’t buy anything she doesn’t need. What makes her exceptional, however, is her level of charity. 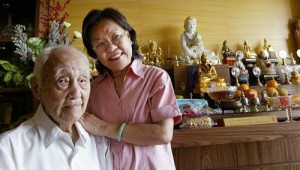 The Ipoh native Mrs. Wong was arranged in marriage to the late Singaporean Wong Kwok Leong, who was 22 years older than her. Despite their age difference, husband and wife found they were compatible, particularly in the field of business. Early in their marriage, the two embarked on a tin business, and everything just went up from there.

Despite the success of their initial venture, Mr and Mrs Wong continued to work very hard, until they were able to extend their business into shipping supplies and hotel industry. By the time she was 23, and even to her surprise, Mrs Wong already owned millions worth of property.

The Wong couple was willing to share their good fortune. In 2006, they donated a million dollars to establish a scholarship at the Singapore Management University. Aside from that, she continually provides financial assistance to the university, which she believes imparts values to its students. When asked how much she gives, she has recorded in her checkbooks that she has given $170,000 – just for the past month alone.

Mrs Wong says that she hurts for children whose parents are unable to give them the resources they need for a good future. Having been unable to attend school herself, she wishes to give that opportunity to those willing to work for it now. This doesn’t mean she’s lost her business skills though. She says that when she gives money, she still also thinks how she might get it back.